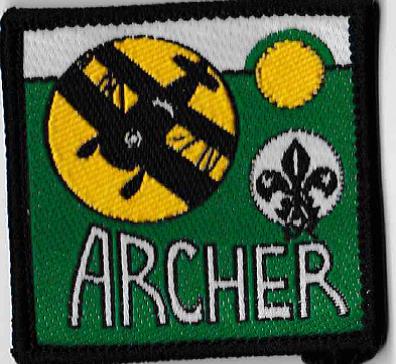 Aircraft = Aeroplane flying over Archerfield airfield which is within the district

The badge was designed by Jean Clifford, Deputy Chief Commissioner (Adults in Scouting) [4]

Archer district named after the Archerfield homestead and pastoral station which was named and used to belong to a Michael Durrack, a tin miner from the Stanthorpe area in 1881. Archer district was originally formed in 1978, and is first mentioned in 1978 Brisbane South Area directory [1, 2]. In 1976, under the guidance of Ross Steele, a trained pilot and former Rover, the district formed an Air Activities committee.  In 1978, following training activities carried out by this committee the establishment of the Archerfield Air Activities centre commenced [3]. The district was closed in 2003 and reformed again in 2017.

The district has some interesting places which include: Market Square (Sunnybank) and Archerfield Airport (Archerfield).