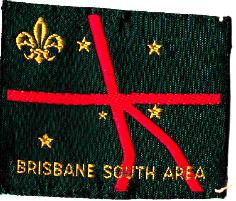 Red lines = Intersection point at Woolloongabba, of Stanley St and Main St with Logan Rd branching off at a 45 degree angle South East.  At the time, this intersection was a major landmark in South Brisbane.  These also represent the exact compass bearings leading to Districts in the area.

Brisbane South County derives its name from the city of Brisbane, which is named after the Brisbane River, which was explored by John Oxley in 1823, and named after the then New South Wales Governor, Sir Thomas Brisbane.

Scouting first commenced in Brisbane in 1908, with four patrols [1], of which one of these patrols (i.e., Kangaroo Point) was in what is today’s Brisbane South Region.  These were:

At the time, there were no groups, districts, counties and regions, and several patrols carried out activities under the name of the locality or organisation that they met, to form local associations, which were registered with the Australian League of Boy Scouts, Queensland Branch [2].  In 1910, local associations within Brisbane, were designated part of Brisbane Zone.  Later in in 1924, Brisbane Division was designated a district [3].  In 1932/1933, Brisbane’s first County Commissioner, Gilbert ‘Wallaroo’ Collings, was appointed.  He was previously the first Brisbane District Commissioner [4].  In 1933, the first mention of some form of Brisbane South was mentioned, with groups in the Brisbane Metropolitan area being split up into four districts, of which Brisbane South and Brisbane South West were two of these.  There was further re-organisation in 1944, with Metropolitan Brisbane being split up into Brisbane North County and Brisbane South County.  In 1946, Ernest Weller was appointed the 1st County Commissioner [5].  In 1965, “counties” experienced a name change to “areas” [5].