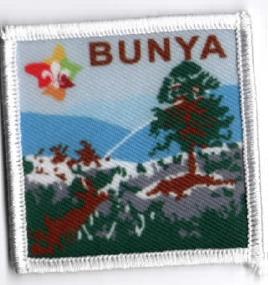 Hills = Scenery of the mountain landscape in the area.

Bunya district is named after the Bunya Mountains National Park, and the Bunya Highway that passes through the town in the district.  The name Bunya is the aboriginal name for the bunya, bonye, bunyi or bunya-bunya tree [1, 2]. The tree grows to a height of 30–45 metres, and the cones, which contain the edible kernels, are the size of footballs, which are a food of the Aboriginals.  It grows prolifically in district between the Bunya Mountains and Gympie.

Bunya District was formed in 1960/61 (i.e., mentioned in the Branch Annual Report 1962/63, but not mentioned on Branch Annual Report 1958/59) and the first District Commissioner was D. D. Cullen [3, 4]. Prior to this the groups within the locality had been part of the South Burnett Scout Local Association which was formed on the 27th February 1957.  These original groups included Goomeri, Wondai, Kingaroy, Murgon, Proston, Nanango and Cherbourg [5].

Prior to the Suncoast Region being formed in 1991, the district was part of the South East Queensland Zone, which was administered by Branch Headquarters in Brisbane, and districts were supported by Field Commissioners [6].  In 1972, the districts within this Zone included: Maryborough, Maheno, Gympie, Cooroora, Beaver Masters, Nambour, D’Agular Range, Murrumba, Bunya, Barambah, Condamine, Dolphin, South Coast, Stradbroke Island and Beaudesert districts.   In 1990 this district was re-designated as being part of the Southern and Western Region [7].