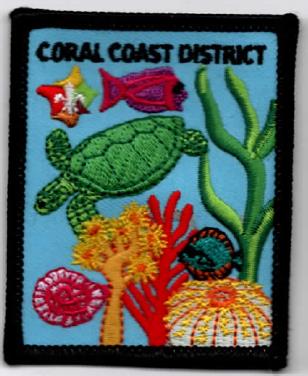 The scene depicts corals, fishes and reptiles (i.e., turtles) which are found in the waters of the Great Barrier Reef.

Coral = Coral reefs are formed by little animals called coral polyps (i.e., a bit like an upside down jelly fish), that secrete calcium which forms the limestone skeleton on which they live.  This skeleton is essentially the foundation of the coral reef.  There are about 600 different types of hard and soft coral within the Great Barrier reef.  Common types of hard corals, which are the building blocks of the reef, include the brain coral and staghorn coral.  Soft corals, as compared with hard coral, tend to be more colourful, and are flexible and look like plants.

Turtle = Turtles are dubbed the “ancient mariners of the sea”.  Within the Great Barrier Reef, there are 6 species of turtle know as the Green Turtle, Loggerhead Turtle, Hawksbill Turtle, Flatback Turtle, Olive Ridley Turtle, and the Leatherback Turtle.  Leatherbacks are the largest living species of turtle on Earth.

Fish = It is estimated that there are between 1200-2000 species of fish within the Great Barrier Reef.  The reef fish are very colourful, and common types of fish include the Anemone (i.e., Nemo), Surgeon, Parrot, Butterfly, Damsel, Coral Trout, Groupers and Cods, Maori Wrasse and Sharks.