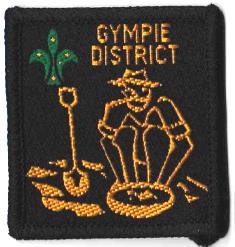 The badge was first designed and issued in 1963, and the image of the Gold miner was adapted from the Gympie coat of arms, to coincide with the Gold Rush theme prior to the City’s first Gold Rush festival [7]

Gympie district is named after the town of Gympie within the Wide Bay-Burnett Region.  Gympie is derived from the Kabi Kabi Aboriginal word “gimpi-gimpi” which means stinging tree [1].  The tree has large, round leaves that have similar properties to stinging nettles. The town was previously named Nashville, after James Nash, who discovered gold in the area in 1867.  The name was later changed to Gympie in 1868.   At the time of Nash’s discovery, Queensland was suffering from a severe economic depression. The gold probably saved Queensland from bankruptcy.  By 1927, the gold had run out and diary farming and agriculture are the primary local industries [2].

The term “Gympie District Scout Association” was first mentioned in 1935.  Prior to this, it was known by a number of names such as “The Gynpie Boy Scouts (Divisional) Association” and the “Gympie Scout’s Council” whose roots can be traced back to 1910.  On 8th August 1912, John Squire Aspinall (1st Gympie Scout Troop) was appointed the first District Commissioner [3].  Prior to this in 1911, the 1st Gympie Troop was awarded the “King’s Flag” or “Challenge Banner”, and were entitled to be called “King’s Own”.  This was for having at least 24 scouts by 30th September who had achieved the King’s Scout Award [4].

Prior to the Suncoast Region being formed, the district was part of the South East Queensland Zone, which was administered by Branch Headquarters in Brisbane, and districts were supported by Field Commissioners [5].  In 1972, the districts within this Zone included: Maryborough, Maheno, Gympie, Cooroora, Beaver Masters, Nambour, D’Agular Range, Murrumba, Bunya, Barambah, Condamine, Dolphin, South Coast, Stradbroke Island and Beaudesert districts.  Gympie district was re-located to being part of Central and Coastal Region in 1982 [6].  In 1991, Gympie district was organised as part of the Sun Coast Region, when the region was formed.