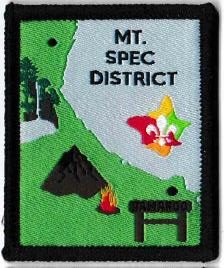 Coastline and Points: Represents the coastline of the disrict, with the Ingham in the North and Deeragun (Woodlands Scout Group) in the South.

The badge was designed by Kilarney Pitts (Venturer) and Brooke Pitts (Scout) Kirwan Scout Group in 2020 [6, 7]

Mount Spec was formed in 2018 [1].  It’s first District Commissioner was Andrew Houghton, who was also the Region Commissioner, Kennedy Region.

Districts within Kennedy Region’s three districts were named after mountains, by the Region Commissioner Andrew Houghton who said that “As scouts are always aiming high, mountains can also be climbed on, abseiled down, bushwalked, mountain biked, kayaked and canoed, flown around and mountains are essentially adventurous.  The mountain peaks overlook the region and have history both in our time and before like scouts, will be around long after we are gone” [2].

The district is named after Mount Spec, which is within the Paluma Range National Park [3].  There is no documented history on the origins of the name Mount Spec, however Queensland place name expert, Mr Sidney May of Ipswich, suggests that the name is derived from the name of a horse.  Right through to the early part of the century, provisions were taken to the top of the mountain by pack horse teams.  One of these horses in a particular team, probably the team leader, is said to have a white star or “speck” on its head and was called “Old Speck”.  The theory is that the horse could be seen in the distance because of its ‘speck’ and that gradually the miners and packers in the area applied the name to the mountain itself [4].