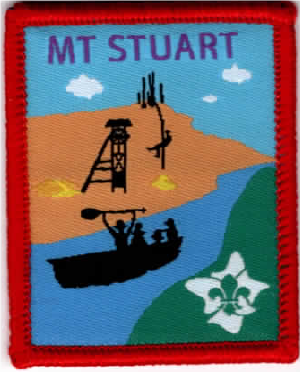 Canoe = rowers who row on the Ross river weekly

The badge design was initially produced by Jesse Hubinger (Scout) and some of the members (Dad and Sons) of the McKeown family, Kirwan Scout Group.  The rough design was graphiccally enhanced by Ron Ostrenski (Adult Helper Radio-JOTA) in 2020 [5, 6].

Mount Stuart district was originally formed in 1968, and its first District Commissioner was Mr R. Goldbrough (former ASM, Pimlico Scout Group) [1, 2].  The district was split in 1974 into Ross River district and Castle Hill district. [3].  Mount Stuart was re-formed in 2018 [4].  In 2018, its District Commissioner was Peter Drew.  Districts within Kennedy Region’s three districts were named after mountains, by the Region Commissioner Andrew Houghton who said that “As scouts are always aiming high, mountains can also be climbed on, abseiled down, bushwalked, mountain biked, kayaked and canoed, flown around and mountains are essentially adventurous.  The mountain peaks overlook the region and have history both in our time and before like scouts, will be around long after we are gone” [5].