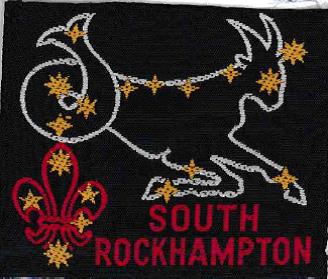 Scout logo with a Southern cross superimposed on top

Zodiac Sea Goat & Stars (South Rockhampton)= Tropic of Capricorn passes through, and there is a monument in South Rockhampton at Curtis Park, Allenstown. Capricornus represents a creature that is a blend of fish and goat and the name means “goat horn” in Latin.

Rockhampton is named by William H. Wiseman, Commissioner of Crown Lands, after a “bar of rocks” on the Fitzroy River that hampered further upstream navigation from the coast.  The Fitzroy River provided a convenient waterway for shipping of supplies further into the Capricon district, and a settlement grew on the riverbanks just downstream of a bar of rocks which prevented further upstream navigation from the coast. These rocks were incorporated with the traditional English term for a village, and the name “Rockhampton” was first used around the 1850s.  The area where Rockhampton city centre is was originally called Gracemere run.