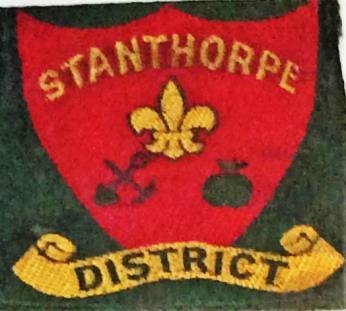 Green Fruit = Agricultural produce Apple and Grapes (when tin prices fell, there was a shift to agriculture, which included wine making).  Grapes were first planted here in the 1860s with encouragement from the local Catholic parish priest Father Jerome Davadi to produce altar wine. His Italian descent made grape growing and wine production a familiar pastime and the notion caught on in the area. Today the apple and grape harvest festival is regularly held in Stanthorpe.

Stanthorpe was founded by tin miners in 1872.  At that time, the area was known as ‘Quart Pot Creek’.  Stanthorpe became for a time, the largest alluvial tin mining and mineral field in Queensland.  The name Stanthorpe literally means ‘tintown’, as Stannum is Latin for ‘tin’ and thorpe is Middle English for ‘village’.  The area is also known for orchards and fruit packing [1].

Scouting in the Stanthorpe area commenced on 20th May 1910, with the formation of the 1st Stanthorpe Scout Troop.  Up until 1984 there were 6 recorded Stanthorpe troops and groups which came and went [2].  By 1984, only 6th Stanthorpe Group, which subsequently was named Stanthorpe Group was still running [2].  It is unclear when Stanthorpe District actually began.  However, Stanthorpe District is mentioned in 1943, and at the time the District Commissioner was F.A.L. Jardine [3].  A District Scoutmaster, E. M. Baker, is also announced for the first time in 1943 [4, 5].