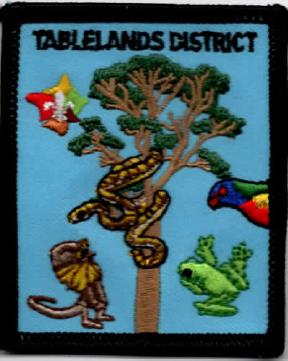 The badge depicts a scene of the rainforest canopy and its fauna.  Rainforests are the most complex kind of vegetation in the world and the mechanisms by which they maintain themselves or changes are of the greatest importance to understanding ecology.  The rainforests of the Tablelands contain many species of giant trees which include the Curtain Fig tree, Twin Kauri tree, Cathedral Fig tree and Giant Red Cedar tree.  The Queensland Government’s Dept of Environment and Sciences lists more than 113 species of reptiles.  Of Australia’s 726 species, nearly 300 species of birds (including 13 Wet Tropic endemics), have been recorded within the Tablelands.  327 of the 420 bird species on the World Heritage’s Wet Tropics region are also found within the rainforests of the Tablelands.  There are also more than 13 species of frogs within this region.  There are many species of snakes within the Cairns and surrounding Far North Qld Region.  Amongst these snake types are the Front-Fanged Venomous snakes, Pythons (non-venomous constrictors), File snakes, Non-venomous and rear-fanged venomous snake, Blind snakes, and Legless lizard snakes.

Lizard = Boyd’s Forest Dragon. A relic of the Jurassic period.

The badge was designed by Sophia Jacques, Scout, Mareeba Scout Group, and first issued in 2020. [4]

Tablelands district is named after the Atherton Tablelands which was named after John Atherton, a pioneering pastoralist, who was the first to find tin deposits in Northern Queensland.